What is Psychological Erectile Dysfunction? Causes and Treatments

What causes psychological erectile dysfunction and is it reversible? And how do you tell the difference between physical ED and psychological? Read this blog post to find out. 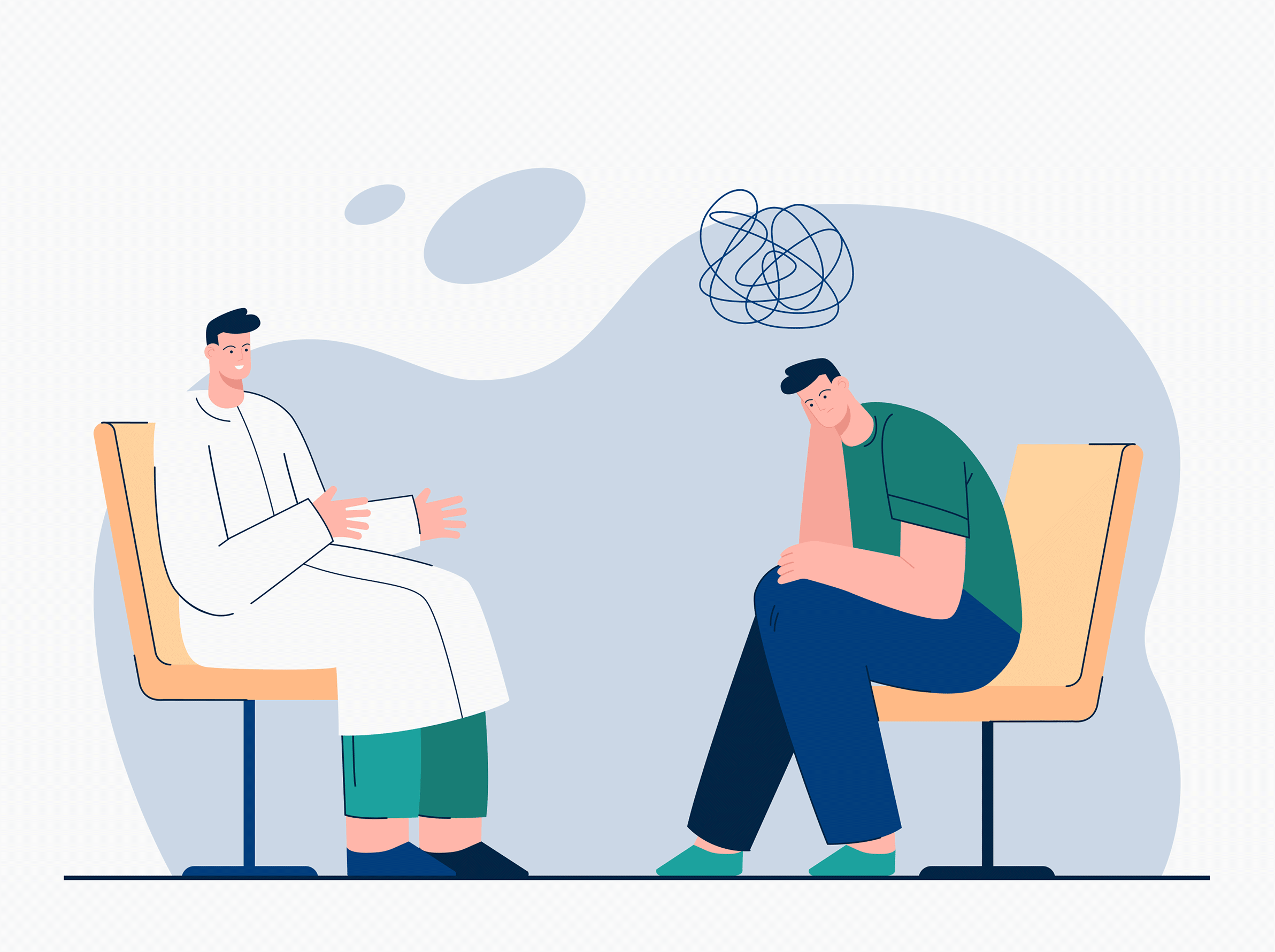 Erectile dysfunction – the inability to get or maintain an erection firm enough for sex – is frustrating for men and their partner, no matter what the cause. However, with psychological impotence there’s no direct physical cause to target during treatment, so resolving the problem can be especially challenging.

Psychological ED can have a snowball effect. During one specific sexual encounter you have trouble getting an erection even after a lot of physical stimulation. Maybe you were stressed from work. Maybe you felt guilty because you just wanted a casual fling and you suspected your potential partner wanted more. Or your long-term relationship was on the rocks and it affected your sex life.

For whatever the reason your attempts at an erection failed, it took a toll on your self esteem, and you’re having trouble during future attempts at sex.

What causes psychological-related erectile dysfunction and what can you do about it? Let’s take a closer look at the problem to find out.

Physical and psychological issues can both cause erectile dysfunction. The most common cause of physical ED is low blood flow to the penis blood vessels and diseases that contribute to low blood flow such as diabetes, obesity, high blood pressure, heart disease.

Other causes of physical ED include aging, sleep disorders and kidney disorders, and Peyronie’s disease, a curvature of the penis that can lead to painful erections.

Doctors and scientists once thought that in younger men, erectile dysfunction was primarily psychological and due to problems like performance anxiety. However, there’s now a greater recognition that metabolic syndrome, high blood pressure, and other risk factors for both heart disease and ED are common in younger men.

Nevertheless, psychological issues could be the cause of male erectile dysfunction, no matter a man’s age. Causes of ED that's of a psychological origin include mental health or emotional issues. In this case, there’s nothing wrong with your physical health. Instead, something is troubling you mentally either consciously or subconsciously.

One root cause or many may explain the origin of the problem. Here are some common psychological factors that can get in the way of a man’s ability to perform sexually. If you suspect any of these factors as the culprit behind your erectile dysfunction it’s a good idea to seek professional medical advice from a therapist.

The problem can originate with low self-esteem, but it can also cause a man to feel unworthy and develop self-esteem or self-confidence issues.

Symptoms of sexual performance anxiety include:

Sexual performance anxiety can become a self-fulfilling prophecy. A man is unable to have an erection during one sexual encounter so the next time he tries to have sex he worries about his ability to perform sexually and then doesn’t have an erection.

Another psychological reason for erectile dysfunction is having experienced sexual abuse or trauma as a child. Working with a professional therapist can help cope with traumatic memories and resolve any sexual dysfunctions related to past trauma.

Stress and anxiety are both psychological factors that can lead to erectile dysfunction. Financial concerns, problems or deadlines at work, raising kids or elderly relatives can have psychological effects that put a damper on a man’s sex life.

Stress starts out as a mental factor but ongoing stress can lead to physical problems like reduced blood flow that contribute to ED. Chronic stress can also lead to the buildup of prolactin, a hormone associated with sexual dysfunction.

Anxiety is more about persistent worrying even if there’s nothing specific present to stress a person out. Having anxiety is linked to erectile dysfunction. Often, the anxiety develops before the ED, suggesting it may have triggered the sexual function problems.

Many men have had good makeup sex after an occasional shouting match with a partner, but ongoing arguments are often a libido killer. Sexual intimacy is tied into emotional intimacy, so if things aren’t going well in the relationship, this could affect your sexual ability.

If a man feels bored in a relationship or no longer feels physically attracted to his partner, this can also lead to performance anxiety and sexual dysfunction. Sexual arousal leads to the production of dopamine, which triggers a series of reactions leading to an erection. Feeling indifferent about sex with his partner kills the dopamine boost and the ensuing erection.

Low self-esteem and negative self talk can cause men to experience ED. In addition, feeling guilty about anything in your relationship with your sexual partner can cause low sexual desire. Many men who are having a hard time getting or keeping an erection due to psychological factors feel guilt and shame that they can’t please their partner, which in turn makes the erectile dysfunction worse.

Watching Too Much Pornography

Some men who watch a lot of pornography develop unrealistic expectations about their real-life sexual partners or their own sexual ability. This can lead to sexual performance anxiety and problems with sexual function.

Depression is to blame for many cases of psychological-related erectile dysfunction. Men who have this mental health disorder suffer from ongoing feelings of hopelessness, sadness, malaise, and/or guilt.

Depression can weigh down a man both mentally and physically. It’s not exactly a libido enhancer, and men suffering from depression often don’t feel like having sex. The actions and emotions of men with depression also leave their partners feeling uninterested in sex.

A few signs that you’re suffering from depression include:

Some drugs used to treat depression such as selective serotonin reuptake inhibitors (SSRIs) can also lead to ED.

How To Know If It’s Psychological ED

The first step is to understand the signs. These include:

If any of the above are true, psychological issues may be the cause of your ED.

Visiting a healthcare professional can help you find the root cause of your erectile dysfunction. A doctor can perform a physical exam and order lab tests to find out if medical conditions are causing your erectile dysfunction and if medical treatment is necessary. Once those are ruled out, a professional therapist can give you a psychological evaluation to determine what mental health issues are causing your ED.

When psychological causes result in sexual health taking a turn for the worse, here are some ways to improve your sex life and enhance your sexual activity.

Once physical causes of ED are ruled out, making an appointment with a professional therapist can pin down the psychological causes of your erectile dysfunction. By using techniques such as cognitive behavioral therapy, a therapist helps you identify and deal with subconscious reasons for sexual dysfunction, as well as past sexual traumas.

A therapist can help men find the source of their feelings of low self esteem and help stop men from feeling like a sexual failure. This will lead to more self-confidence during sexual activity.

If the problem is relationship issues, seeking out couples’ therapy may reduce conflict and put you at the top of your sexual game again.

Talk to Your Partner

One of the best ways to resolve conflict or hurt feelings in a relationship is to open a dialogue and get everything out in the open. For guys, sharing fears and feelings about anything other than their favorite football team isn’t always easy, but if you take the risk and talk to your partner it can pay off sexual dividends over time. Men who find it hard to open up can ask their partner to participate in couples’ counseling sessions.

In men whose psychological ED is caused by stress or anxiety, meditation and yoga may lead to improved erectile function. Research shows that mindfulness meditation reduces anxiety. Although there are no good studies showing it can improve sexual performance anxiety, it makes sense that anything that leads to feeling more relaxed will improve the sex life of men who are anxious about sex.

In a study of 30 men, a type of yoga called Stambhanakaraka reduced premature ejaculation and performance anxiety compared to the men in the placebo group. The men in both groups also received psychological counseling.

Guided imagery is another option. In this type of therapy, you either listen to a script that describes an outcome that you want to happen or simply create visual or mental images of a desired outcome, which may include having stronger, longer-lasting erections and great sex with your partner.

Anything that relieves stress and tension such as exercise can improve sexual health in men with mental-health-related ED.

A physical examination, medical history, and tests ordered by a doctor can determine if you’re a good candidate for this type of ED treatment. Anti-anxiety drugs are also sometimes used.

How do you know if ED is psychological?

Erectile dysfunction can be caused by physical factors or psychological ones. You can suspect a psychological cause of ED if any of the following are true:

It’s always a good idea to visit your healthcare professional to rule out any physical causes of erectile dysfunction before determining that the cause is psychological.

Causes of ED that has a psychological rather than physical origin can include:

Can psychological ED be cured?

Certain strategies can reverse erectile dysfunction that’s related to mental health, depending upon what’s causing the problem in the first place.

Does sildenafil work for psychological ED?

ED medications like sildenafil and tadalafil can help some men with performance anxiety during sex. Studies have shown these drugs are able to reduce premature ejaculation in some men. Often they work best on a temporary basis while also trying to figure out the root cause of the psychological ED.