Marijuana and Erectile Dysfunction: Does weed affect Getting Hard? 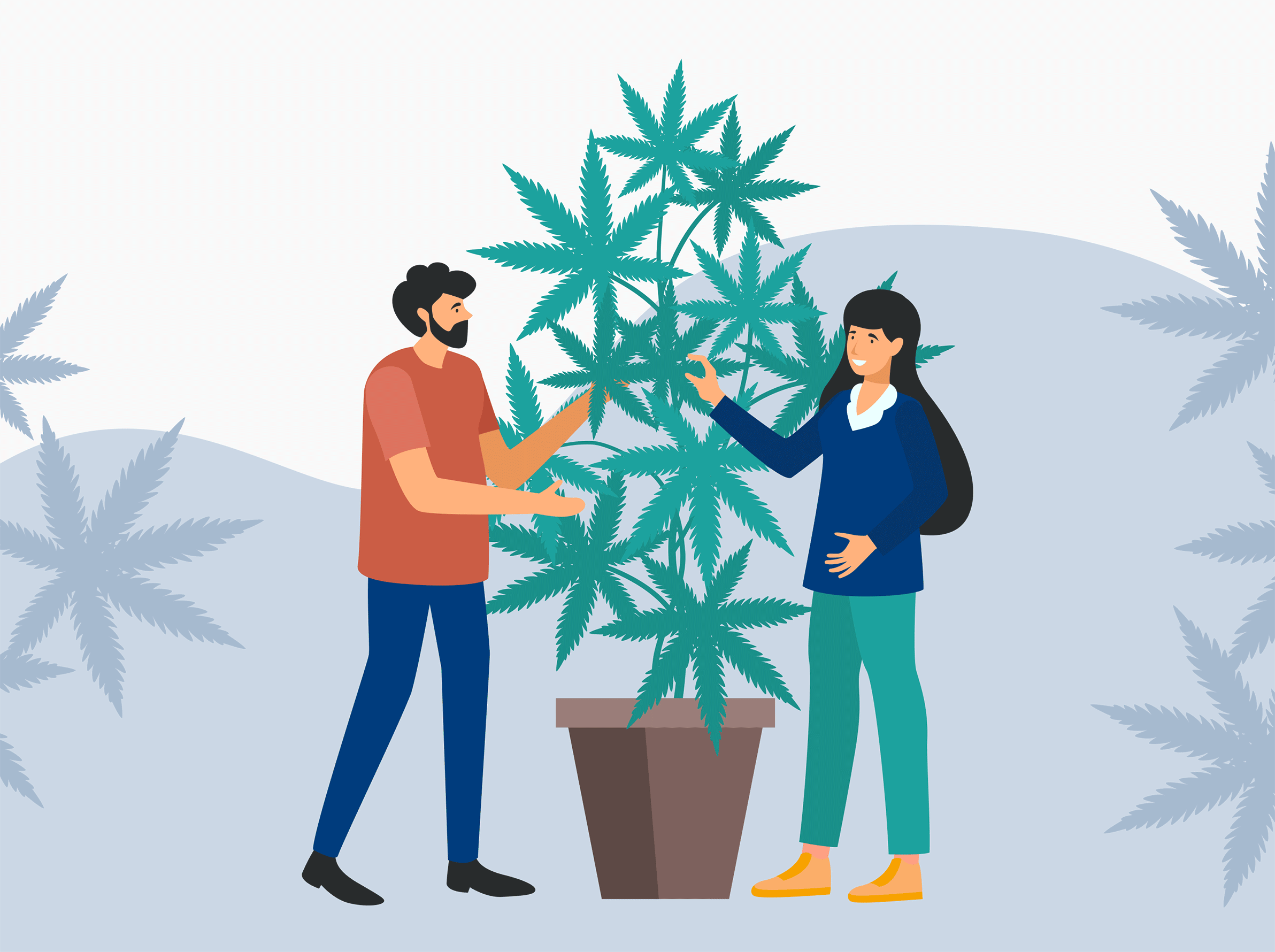 Smoking weed for recreational and medicinal purposes has been thought to cause erectile dysfunction in men. Still, it's unclear whether it's the active ingredient in marijuana or the smoke that causes the problem. A studies suggest that smoking pot will not hurt the condition as long as the patient takes a prescription drug for erectile dysfunction.

The attitudes toward smoking weed as a recreational drug have shifted dramatically during the last few years. Instead, it is increasingly regarded as more beneficial than negative in terms of its effects. The legalization of cannabis has been seen across several states in the USA and throughout Canada, and many more laws were passed allowing the legalization or decriminalization of marijuana as a drug. The exception for medical use has simplified cannabis cultivation.

Others reported having a more positive sexual experience when using recreational marijuana. It causes euphoric effects to increase arousal and relaxation and increase tactile sensuality in humans. Some people even say marijuana's effects help one last longer in bed. But studies have shown that the drug altered our perception of time, resulting in the illusion that you have lasted longer than expected.

Effects of Marijuana on sexual performance

Is smoking wed harmful for your sex life? Okay, so the short answer is maybe. The short-term effects of cannabis use can affect your erectile function and prevent an erection from developing. Erectile dysfunction can arise due to irritability, anxiety and fatigue, alcoholism, excess activity, and excessive sleep. According to some studies, marijuana consumption may cause poor erectility.

One of marijuana's effects can produce an elevation in blood pressure in the short term. Because erectile dysfunction and high blood pressure are closely related, it's essential to be mindful of this if you're worried about your performance.

However, marijuana may help avoid high cholesterol. In one 2013 study, scientists discovered that some compounds in marijuana might assist in minimizing the harm caused by excessive cholesterol to the bodies cardiovascular system.

This is an intriguing result because excessive cholesterol and cardiovascular disorders are directly connected to ED. However, it should be noted that this research was conducted on mice rather than people. Therefore its findings may not be relevant.

Finally, several studies have found a direct relationship between marijuana use and erectile dysfunction or other sexual dysfunction, in addition to other performance issues.

While some chemicals in marijuana are still active in your body, researchers indicated in one 2011 analysis of other studies that marijuana might trigger reduced erectile function, particularly in the smooth muscle penis tissue, perhaps leading you to experience erectile dysfunction.

Researchers discovered a relationship between marijuana usage and difficulties obtaining orgasm in guys in a 2010 study. Intriguingly, marijuana usage was also connected to an increase in premature ejaculation in the males who took part in the research.

Does marijuana cause erectile dysfunction?

So far, the studies are unclear. When the smooth muscle in your genital cavity relaxes, your erection increases the circulation in your blood. Delta-9 Tetrahydrocannabinol (THC) is an antipsychotic drug that can leave people feeling high. THC activates the receptor of cannabinoids in cellular tissues that are all around us. These receptors in your brain produce an elevated state. However, the effects don't always happen. The corpus cavernosum has cannabinoids receptors. There is no evidence of a conflict in the study. Studies show activating receptors on the penis can help muscles relax, reducing blood circulation.

To treat erectile dysfunction, medications such as tadalafil, vardenafil and sildenafil are widely used. These drugs operate by allowing more blood flow into the shaft and engorge the shaft tissue required to get an erection.

Marijuana is classified as a Schedule one substance on the federal level. Thus doing research into the drugs possible interactions with sildenafil and other erectile dysfunction treatments is restricted.

Marijuana has been reported to interact with sildenafil. This might potentially boost sildenafil's effects on cardiovascular systems. According to reports, an individual had a heart attack when taking sildenafil and using marijuana in one occasion.

For those who have ED after using marijuana or even eating marijuana edibles, do not take sildenafil or some other ED drug without getting a prescription or without your doctor's advice. Instead, make an appointment with your health professional to discuss your symptoms and possible treatment choices.

Does weed affect getting hard? The lack of evidence

There is no reliable evidence that this drug use in itself causes erectile dysfunction. As with most illegal drugs, cannabis is harmful. The impact is affected by various things. They include frequency and mode of consumption, drug tolerance, age, and lifestyle choices. Therefore, more study is needed.

Unfortunately, there is no simple answer on the effects of marijuana on erectile dysfunction, which is still relatively unknown. That's not to say they're not true — some studies have indeed suggested a link between weed use and difficulties having an orgasm — but that there's not a clear scientific consensus that marijuana use causes noticeable or permanent ED problems.

Despite research saying there is a link, multiple other research has shown no solid evidence relating marijuana use and erectile dysfunction. So, if you're scared that years of pot smoking have irrevocably damaged your sex life, don't be.

Long-term alcohol and cigarette use, on the other hand, should be cause for concern since both have been demonstrated to have a notable influence on erectile function. And keep in mind, if you mix tobacco with your smoking, it may be the tobacco, not the pot, that's affecting your erections.

While there is no proof that weed causes erectile dysfunction or that stopping marijuana can restore erectile dysfunction, that doesn't mean it can't (or won't) influence your sex life in the future - it is just that scientists haven't been able to establish it's likely.

Medicinal uses of cannabis and recreational weed smoking are legally available within most states. It is still classified with other illegal drugs at the federal level. The effect of marijuana on male sexual performance has mainly remained unknown, and only a few studies have provided information on the results. Presently studies show cannabis may be beneficial to sexual enjoyment; other research shows the possibility of causing erectile dysfunction and other problems. There are no complete study data with enough evidence to give an honest, definitive conclusion. If you're experiencing erectile dysfunction from marijuana, consult your doctor.

Is there a difference between cannabis Sativa and cannabis indica?

Yes, however, the studies show no conclusive evidence on which type of marijuana affects sexual experience, ejaculatory control, or the ability to maintain a firm erection. In addition, the level of THC in marijuana and the availability of the cannabinoid receptors for processing THC can matter.

Can other psychiatric medications conflict with weed and sex-causing ED?

Marijuana can interact with various other pharmaceuticals, including psychiatric treatments, asthma medications, blood thinners, antiretroviral drugs, other recreational drugs, and substances such as alcohol.

What are some other effects of smoking weed on the body?

Other health effects of marijuana users on sex include low desire for physical activity, anxiety, possibly even premature ejaculation due to enhanced physical sensations.

What are the positive effects of marijuana on my health and body?

Cannabinoids, the active compounds in medicinal marijuana and how they react to cannabinoid receptors, are comparable to chemicals produced by the body that regulate hunger, memory, movement, and pain. According to preliminary studies, cannabis may: Reduce anxiety. Relieve pain and inflammation by reducing inflammation.