Alcohol and Erectile Dysfunction: Is It Temporary?

How much alcohol does it take to cause erectile dysfunction? And how long will the sexual performance problems last? Find out here. 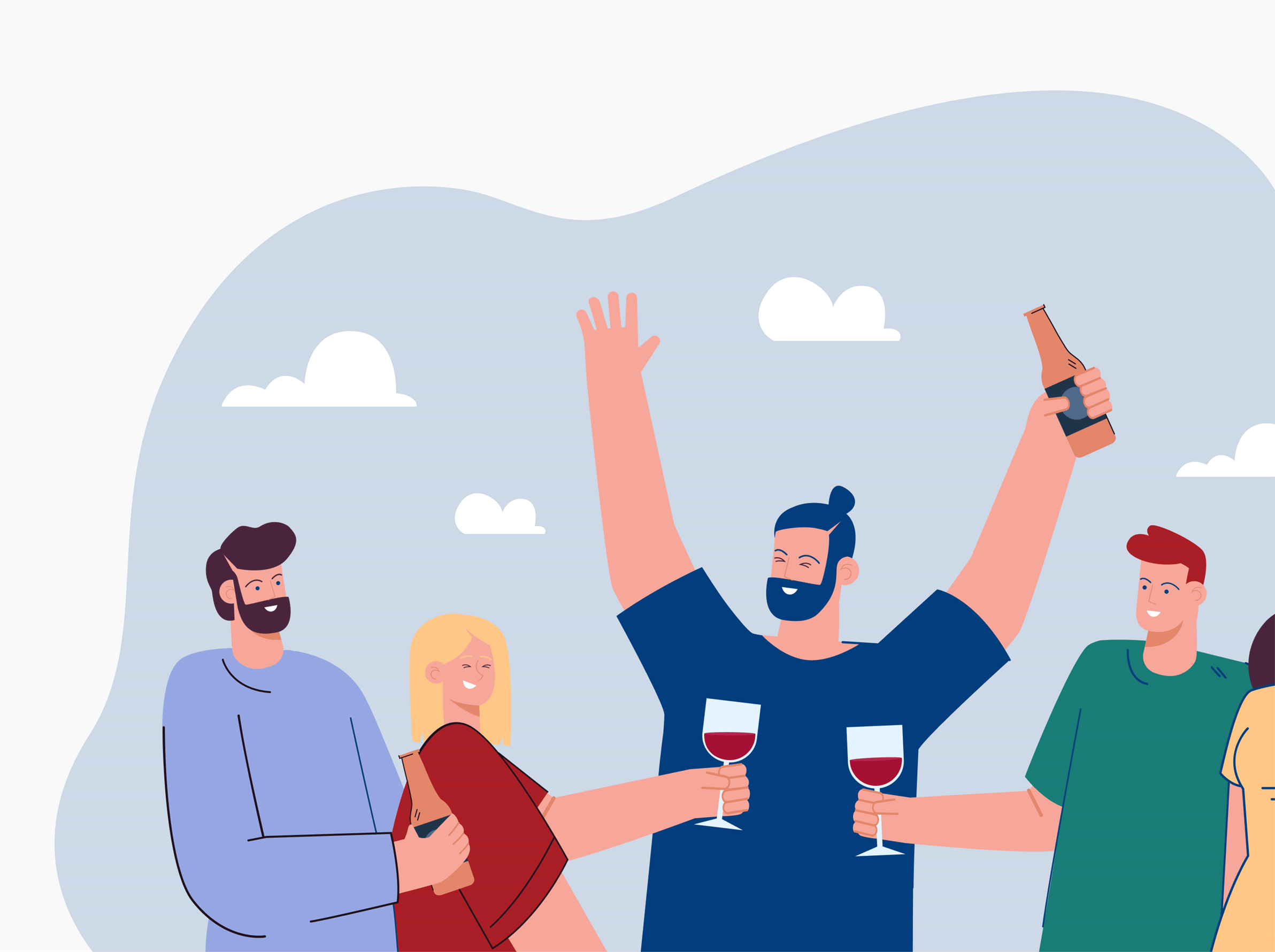 It’s common to have a drink to relax and give you some liquid courage before a sexual encounter. Having a nightcap or two could even relieve a man’s sexual performance anxiety.

However, this strategy can backfire, since drinking too much alcohol could have the opposite effect on your sex life – alcohol may cause erectile dysfunction, also known in casual conversation as whiskey dick.

How much is too much alcohol for a strong erection? And will the effect of drinking alcohol last for a while or is the alcohol-induced erectile dysfunction (ED) temporary? Let’s dig a little deeper to find out.

Does Drinking Cause Sexual Dysfunction?

Today, much of the research investigating how alcohol affects male sexual function found that it’s all about the amount of alcohol consumed.

The Amount of Alcohol Consumed Matters

A review of the medical literature found that light alcohol consumption – the equivalent of one drink in men who weigh less than 190 pounds and two drinks in men who weigh more than that – is not linked to erectile dysfunction. In fact, light drinking enhances sexual desire and sexual function.

Even Thinking About Drinking Has an Effect

The authors of that same review also found that even the anticipation of having alcohol led to increased sexual arousal in some men who were thinking about going to a party where they thought they might imbibe.

Many men associate drinking with sex, so even in social situations where they aren’t drinking, if there’s alcohol around they become turned on.

Another benefit of a small amount of alcohol consumption is improvement in blood circulation. Unlike heavy drinking, which reduces blood flow, light alcohol use improves blood volume, which is good for your heart and your sex life.

The story is different for men who periodically binge drink, often drink heavily, or who are alcoholics or alcohol dependent. In these men, alcohol increases the risk of low sexual desire and sexual dysfunction.

In studies of men treated for erectile dysfunction, moderate to heavy alcohol consumption was linked to worse sexual function.

Regularly imbibing a lot of alcohol is also associated with other sexual functioning problems such as premature ejaculation and inability to ejaculate.

Moderate Alcohol Use and Erectile Dysfunction

In some men, even a moderate amount of alcohol could lead to low sexual desire.

One study published in the Journal of Sex Research investigated the effect of 1 to 3 drinks weekly, consisting of 1 to 3 ounces of alcohol per occasion on orgasms and ejaculation in young men ages 22 to 34. The study found men who had higher blood alcohol levels took longer to reach orgasm.

How Many Drinks Does It Take?

Exactly how many drinks can lead to sexual dysfunctions? Many men who drink two or more drinks in an hour could experience problems getting an erection.

Your best bet? In the few hours leading up to sex, drink no more than one drink per hour.

Sex therapists suggest that men who frequently have sexual dysfunction problems like premature ejaculation refrain from alcohol use at all before sex or only have one drink in the hour or two before getting together with their partner.

Other Related Factors to Think About

Although slightly off topic, it’s worth bringing up that getting drunk comes with the risk of unprotected sex and the possibility of contracting a sexually transmitted disease. Always have a condom on hand to reduce this risk.

The Reasons for Alcohol-Induced Sexual Dysfunction

Too much alcohol before sex can affect sexual function in a number of ways. Here’s how alcohol affects erectile function:

Heavy drinking decreases the flow of blood to the vessels of the penis. The corpus cavernosa of the penis depends upon healthy blood flow to trigger an erection.

By contrast, light alcohol drinking increases the release of nitric oxide, which widens the blood vessels and increases the flow of blood to the penis.

Drinking a lot of alcohol can make sex less pleasurable and weaken the intensity of a man’s orgasm.

Long-term alcohol abuse can increase the risk of developing a condition known as alcohol neuropathy. This can lead to irreversible damage to the nerves of the penis and lead to erectile dysfunction.

Abstaining from alcohol and supplementing with B vitamins may heal the nerve damage, but often it’s permanent.

Chronic heavy use of alcohol depresses the central nervous system, which interferes with signals between the brain and the penis. This can lead to sexual dysfunction.

Increases Levels of an Erection-Disrupting Hormone

Alcohol consumption increases levels of a hormone known as angiotensin, which is linked to erectile dysfunction.

Affects Your Relationship with Your Partner

Alcohol consumption can cause issues in relationships that can contribute to sexual problems. Relationship issues linked to alcohol abuse include arguing, infidelity, and financial problems.

If you only drink heavily on rare occasions, your sexual function will likely return to normal hours after being off the booze.

Even so, in men who engage in a night of binge drinking, the temporary erectile dysfunction caused by downing a few drinks can last for up to several hours after they stop imbibing, even when they no longer feel inebriated and testing reveals they’re no longer intoxicated.

Having medical conditions like diabetes mellitus or cardiovascular disease can also interfere with how long it takes your body to recover after a night of getting drunk. Medical conditions affecting your health can combine with the damage you did during your night – or nights – of boozing. This can extend recovery time.

Too Much of a Good Thing

The bottom line? Downing an alcoholic beverage from time to time may not hurt your sex life – in fact, it might enhance your erections and reduce the risk of erectile dysfunction.

The problem is when you drink too much alcohol either on the short term or day after day. In that case, your sex drive will thank you if you cut back on the booze. Men who are too alcohol dependent and need to give it up completely may need to seek help from a therapist, Alcoholics Anonymous, or treatment centers.

What is whiskey dick?

Whiskey dick is the slang term for temporary erectile dysfunction caused by drinking alcohol. Whiskey dick can stop a man from getting an erection at all or lead to a soft erection that doesn’t last long enough to have sex. Whiskey dick usually only happens after downing a lot of alcohol.

Does alcoholism cause permanent erectile dysfunction?

Chronic alcoholism is linked to symptoms of sexual dysfunction. Regularly consuming a lot of alcohol can cause damage that reduces blood flow to the penis, injures nerves, and interferes with a man’s ability to reach orgasm. The damage is often not permanent and sexual performance often improves after giving up alcohol – with some exceptions.

Alcoholism over the long-term can lead to an increased risk of health conditions like heart disease and diabetes, which are linked to permanent ED.

Chronic alcoholism can also result in permanent nerve damage that stops the penis from performing its best. Supplementing with B vitamins may help resolve the nerve damage, but there are no guarantees.

Alcoholism is also associated with relationship problems that aren’t conducive to a gratifying sex life.

Mental health issues that drive a man to drink in the first place often don’t go away after giving up alcohol, so seeking professional help from a therapist or treatment centers is advised.

Can alcohol-related erectile dysfunction be reversed?

A night of binge drinking that led to alcohol wreaking havoc on your sex life likely won’t lead to permanent erectile dysfunction, and the damage can easily be reversed.

However, keep in mind it can take several hours after your last drink – even when you feel sober again – until your sex drive returns to normal.

Men who have been downing serious amounts of alcohol for a long time may find it takes longer for their sexual performance to bounce back after giving up alcohol.

Heavy drinking can affect the cardiovascular system and blood flow throughout your body, including to your penis. It will likely take a while after giving up alcohol before your blood vessels heal and your penis responds the way you want it to.

How many drinks does it take to cause sexual dysfunction?

As a general rule, the higher the alcohol intake, the greater the risk of experiencing sexual dysfunction. Yet, research has found that even one to three drinks weekly can cause symptoms of erectile dysfunction if your blood alcohol level is high enough.

Problems can start at around two or more drinks in an hour. That’s why experts advise enjoying no more than one drink an hour in the few hours leading up to sex.

Sex therapists recommend that men who often have problems with premature ejaculation don’t have any alcohol before sex or limit alcohol consumption to a total of one drink in the hour or two before sexual intercourse.