Erectile Dysfunction and Smoking: Is There A Connection?

Worried what tobacco is doing to your sexual health? Here is what the science says about erectile dysfunction and cigarette smokers, plus tips on how to quit. 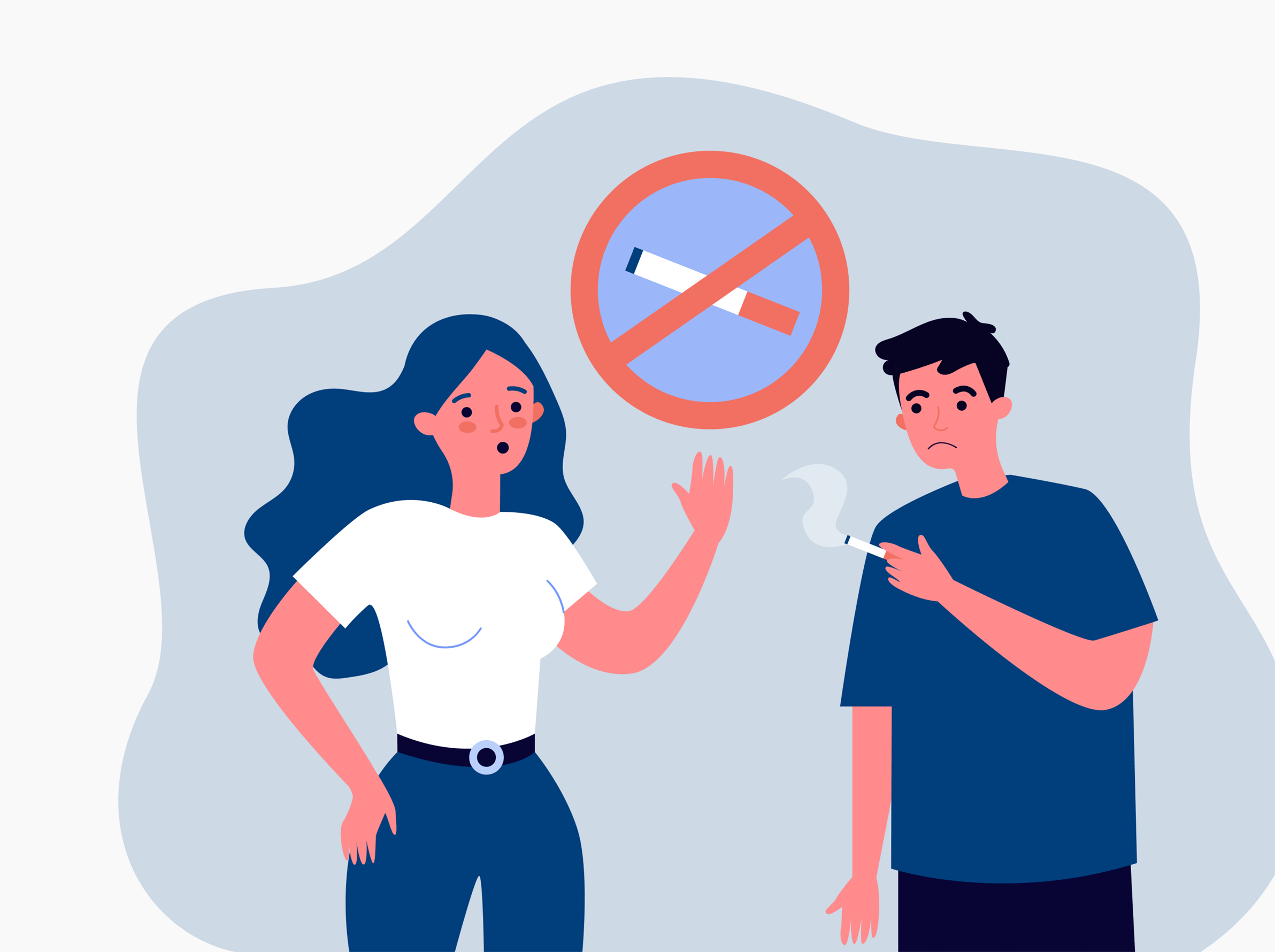 There are a lot of good reasons to give up cigarettes including improved heart health and a reduced risk of cardiovascular disease including coronary artery disease, angina, stroke, peripheral vascular disease, and congestive heart failure. Smoking can also affect health in other ways, including damaging the lungs, kidneys, and brain. However, perhaps one of the biggest incentives to quit – at least for men – is the link between erectile dysfunction and the use of nicotine in any form, including cigarette smoking.

What does the scientific evidence say about erectile dysfunction and smoking cigarettes and how long does it take for erectile function to improve after you’ve quit? Let’s take a look.

Erectile dysfunction (ED), also called impotence, is the inability to get or maintain an erection. Research suggests that men who use cigarettes have a higher risk of ED symptoms. Here’s what some of the studies have reported:

Erectile Dysfunction, Quitting Smoking: How Soon Will I See Improvements?

The answer to this question likely varies from man to man. However, research does give us some idea as to when you can expect improvement after you stop smoking. One review found that in half the subjects who quit smoking, ED status improved at six months.

In another study, smokers with ED quit smoking and underwent a year of follow up afterward. There was significantly better ED status in more than 25% of ex-smokers compared to none of the men currently smoking. During the year’s timeframe, erectile dysfunction got worse in 6.8% of current smokers and in 2.5% of ex-smokers.

This study also found that ED severity was significantly linked to how much a man smoked. In the men who quit smoking, patients with advanced erectile dysfunction and men who were older improved less.

Most men who stop smoking experience improved circulation within two to 12 weeks. These improvements after quitting smoking are likely to reduce ED in many men.

Nicotine – whether you’re exposed to it in cigarettes, pipe tobacco, or cigars – constricts the vessels, in part by reducing levels of nitric oxide, a blood-vessel-widening substance. An erection depends on healthy blood flow into the vessels that supply blood to the spongy tissue of the penis known as the corpus cavernosum.

By narrowing vessels, nicotine reduces blood flow into the corpus cavernosum and can interfere with healthy erections.

This restricted circulation is the reason why smoking cigarettes is linked not only to erectile dysfunction but also to cardiovascular conditions and overall health concerns. Poor blood flow is considered a warning sign of impending heart disease. This is why ED, especially in younger men, is a red flag for poor cardiovascular health and an increased risk of cardiovascular disease.

Can Vaping Cause Erectile Dysfunction?

Many men use e-cigarettes (e-cigs), otherwise known as vaping, because  they think it’s a safer alternative to smoking cigarettes. However, vaping can cause damage to the endothelial lining of the blood vessels, a known cause of ED. Researchers are calling for more clinical trials before saying for sure whether vaping causes ED.

Cigar smoking also exposes men to nicotine – and a lot of it – since cigars are unfiltered and have more of it than cigarettes. A study of 513 men who were participating in the Massachusetts Male Aging Study found that cigar smoking was significantly associated with an increased likelihood of having erectile dysfunction.

One of the best ways to improve your sexual performance and overall health is to give up all sources of tobacco. If you’ve tried in the past, you know that smoking cessation isn’t easy, and going cold turkey usually doesn’t work. The American Cancer Society recommends choosing a day that you will quit and sticking with that plan.

Seeking professional medical advice is always a good start as a doctor can help you decide whether you need to be on a cigarette withdrawal drug or some other treatment. Meanwhile, here are some common ways to quit smoking to improve ED and overall health.

During this approach, low doses of nicotine are used to reduce cigarette cravings and eliminate symptoms of withdrawal.

Types of replacement therapies include:

There are drugs doctors can prescribe as a treatment to help stop smoking. Ask your doctor about these treatment options and their associated side effects. Drugs to quit smoking include bupropion SR (Zyban, Wellbutrin) and varenicline (Chantix).

Two other drugs are sometimes used off-label to treat cigarette withdrawal symptoms: nortriptyline (an antidepressant) and clonidine (a high blood pressure drug). Talk to your doctor about how long before you quit smoking to begin the medication you are taking.

A counselor who specializes in substance abuse and addiction can help you quit the cigarette habit and improve your mental health. Your doctor can recommend some good options for therapists.

Discussing your challenges with others who are quitting smoking can shore up your resolve to stay away from tobacco.

According to the Mayo Clinic, most tobacco cravings pass within five to 10 minutes. Although that length of time can seem like forever to someone who is trying to quit the cigarette habit, resist the urge and instead occupy yourself with other activities until it passes.

The urge to smoke tobacco is often strongest at times and places where you were used to indulging your habit. While trying to quit, it may be best to avoid those situations if possible. For example, if you smoked at parties or bars, don’t go to any until you feel strong enough to attend.

If you smoked when stressed, try relaxation techniques like meditation, yoga, or exercise, which will enhance your cardiovascular health, too.

Distract Your Hands and Mouth

Experts recommend keeping your hands busy by doodling on a piece of paper, for example, or squeezing a stress ball. Chewing gum is a good way to keep your mouth occupied and distracted from cigarette urges.

Although everyone can be different, the following symptoms of withdrawal are the most common, according to the Centers for Disease Control and Prevention.

Wondering about the connection between cigarette smoking and erectile dysfunction? This doesn’t constitute medical advice, but here are some topics you can discuss with your doctor.

Yes, scientific research suggests using any product that contains nicotine could lead to ED by interfering with the flow of blood to the genital area. Exposure to secondhand smoke is also linked to ED.

How many cigarettes can cause erectile dysfunction?

No one knows for sure the exact number of cigarettes that can cause ED, as there are likely individual differences. However, science shows that if you are a heavy smoker, you may have a greater risk of ED compared with men who smoke less. One review of medical journal studies found that heavy smokers who used at least 10 cigarettes per day and smoked for at least 10 years had a greater risk of developing ED.

How long after quitting tobacco use does erectile dysfunction improve?

Sexual performance could begin to improve in as little as two to 12 weeks after kicking the habit since circulation throughout the body and to the penis is enhanced during this time. Many men find that their sex life improves within six to 12 months after giving up cigarettes, but men with severe ED or who are older may find it takes longer to improve.

Can vaping and cigars cause erectile dysfunction?

E-cigs (vaping) and smoking cigars are associated with erectile dysfunction. E-cigs can damage the blood vessel lining, decreasing the flow of blood to the penis and blocking the ability to have a strong erection. Cigars have a high nicotine content, which constricts blood vessels and leads to decreased sexual performance.