What Are Average Testosterone Levels By Age in Men?

Normal testosterone levels vary by age. How do you know if your levels are too low and what are the symptoms of low T? Read this article to find out. 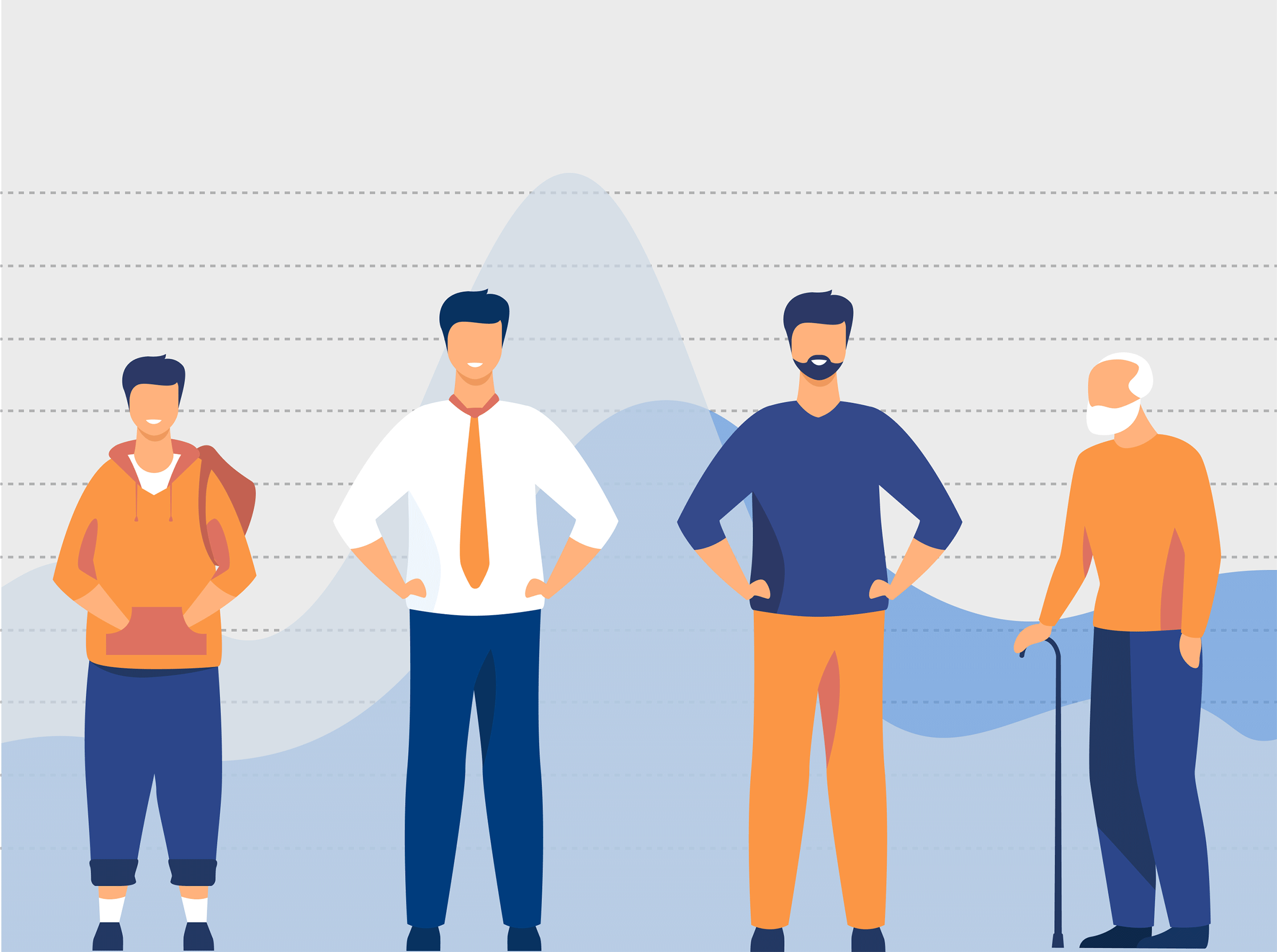 Testosterone is one of the most important hormones for a healthy sex drive in men, as well as strong erections.

But this hormone isn’t only critical for a great romp between the sheets—it plays an important role in many other aspects of health including maintaining a healthy heart, keeping your body lean, and boosting energy levels. All of these factors are not only important for overall health, they reduce the risk of erectile dysfunction, too.

Testosterone deficiency, what scientists call hypogonadism and others call low T, can have much more serious health consequences than you might expect. In fact, a recent study showed that low testosterone may be responsible for an increased risk of heart attacks and strokes in men with cardiovascular disease.

Heart health is strongly linked to erectile function, so keeping testosterone levels in the normal range can do double duty to protect the heart and men’s sexual health.

So how low do a man’s testosterone levels have to dip to affect his health? In men, what are normal testosterone levels by age? And what causes low T in the first place? This article will answer those questions and offer some suggestions on how to boost levels of this important hormone in your body.

Testosterone is a male hormone known as an androgen. It’s produced in the testicles of men and in the ovaries, adrenal glands, and other tissues in women. Men produce far higher levels of testosterone than women.

This hormone plays an important role in the male body even before birth as it’s critical to the development of male sex organs. As a boy grows into a man, it is involved in certain male characteristics like growing facial hair and developing a deep voice.

It’s also important for building muscle mass and for the production of semen. Its other roles include keeping the body lean and preventing weight gain, maintaining healthy bone mass, and promoting a good mood and a sense of well-being.

Unfortunately, in men, testosterone levels begin to gradually decrease after age 30. This spells trouble for many areas of health, including sexual function.

Testosterone levels are highest in teenage boys ages 17-19 years old and lowest in boys ages 7-10. For the next couple of decades, in healthy men without health conditions, the average level can remain fairly steady. It begins a slow decline around the age of 30 at the rate of around 1% per year. During aging, it decreases an average of 3.17 ng/dL/year.

By the age of 70, average testosterone production drops to around 30% of what it was when a man was in his teens. Yet, it’s not inevitable that an older man has levels below the normal range. An estimated 60% of men over 45 actually have normal levels of this hormone.

According to the American Urological Association, total testosterone levels below 300 ng/dL in adult males should be considered low. The Hypogonadism in Males Study estimated that 38.7% of men aged 45 years or older have a deficiency in testosterone.

Many doctors consider 200-300 ng/dL to be a gray area. In this range, unless you have symptoms of low T, your doctor may choose not to do anything.

High testosterone levels are rare, especially in older men, since levels decline with age. Excess testosterone is most likely related to too high a dose of testosterone replacement therapy. Other causes of too much T include adrenal and testicular tumors and anabolic steroid abuse.

When men aren’t producing enough testosterone, it may lead to any number of health problems. These include:

Testosterone below the normal range may cause a drop in energy levels. If you’re tired all the time even after getting enough sleep, the problem may be that your testosterone levels have tanked. Be sure to work with your doctor, since many health conditions can cause fatigue.

Low testosterone is linked to problems with heart health. The American Urological Association recommends that patients with below normal testosterone levels be aware that a deficiency is a risk factor for cardiovascular disease.

Testosterone fuels a man’s libido and gets him fired up to have sex. If your sex drive isn’t what it used to be, it could be a sign you don’t have enough of this hormone.

Testosterone levels that are below normal are linked to the inability to achieve or maintain an erection. Testosterone activates brain receptors that stimulate sexual arousal. When levels of this hormone are low, replacement therapy can lead to better sexual health and stronger erections.

Testosterone levels below the normal range might be to blame for those flabby abs and a tendency to gain weight in other areas of your body. The opposite is also true: being overweight or obese lowers T production, so it becomes a vicious circle where low levels lead to weight gain and the additional pounds cause a drop in testosterone.

When testosterone levels decline, hair loss can occur in some men. A mane of hair that isn’t as thick and full as it used to be may serve as a sign for low T. Facial hair and body hair might also suffer.

Testosterone builds muscle mass and increases muscle strength, so low levels of this hormone can lead to weak muscles. If you feel like your weight lifting sessions aren’t living up to your expectations, a drop in testosterone could be to blame.

Weak bone density may also be a sign of a testosterone level that’s on the low side. Testosterone replacement therapy improves bone density in adolescent boys. Researchers also have found that low T is responsible for about 20% of osteoporosis cases in older men.

A decline in testosterone can impact your mood and cognition, too. If you find yourself easily losing patience, getting depressed, and/or not thinking clearly, talk to your doctor about getting your levels tested.

Testosterone levels can take a tumble for many reasons. Some of the most common include:

Lifestyle changes that address these factors can go a long way in improving testosterone levels.

How To Test for Below Normal Testosterone Levels

Most doctors will only order these hormone tests when men have symptoms of deficiency or during testosterone replacement therapy to make sure levels aren’t too high.

The best time to test is in the morning, when levels are the highest and likely the most consistent. Throughout the day, levels fluctuate and can vary.

The American Urological Association recommends that before diagnosing a man with low testosterone, doctors perform two total testosterone tests on separate occasions in the early morning.

Some doctors use saliva tests to measure this hormone. Research shows these tests are as accurate as blood tests.

If your doctor diagnoses you with low testosterone, the first item up for discussion will likely be whether you should start replacement therapy. Replacement therapy has a few benefits. It can enhance sexual function, improve energy, strengthen the bones and muscles, and improve mood and well-being.

Men can replenish their testosterone levels in a number of ways:

Replacement therapy might be contraindicated in some men. There’s controversy over whether it can harm or help the heart and cause venous thromboembolism (blood clots in the veins). Men with untreated prostate cancer should also talk to their doctor about whether it’s safe to use this type of therapy.

Some studies initially suggested that testosterone therapy makes obstructive sleep apnea worse, but later research indicates this is likely only a temporary effect.

Other side effects of therapy include acne, breast enlargement in men, and back pain.

Other Ways To Increase Testosterone Levels

Testosterone therapy will have the most dramatic effect in raising hormone levels. However, there are a few other ways you might be able to boost your T levels. These include putting into practice a healthy lifestyle and possibly taking some dietary supplements:

Other testosterone-boosting supplements include ashwagandha, a botanical that soothes stress and may increase testosterone by reducing levels of the stress-hormone cortisol. Research also suggests that the plant fenugreek may improve testosterone levels. Confirm with your doctor that these supplements don’t interact with any medications you’re taking.

What is a normal testosterone level?

When measuring total levels of this hormone, measurements below 300 ng/dL are considered low, although if a man is in the 200-300 ng/dL range and has no symptoms, a doctor may choose not to start treatment.

For adult men, a normal level falls between 300-950 ng/dL, but keep in mind that a man who exercises lightly won’t need as much testosterone as an athlete who pushes himself to the limit. During the teenage years, when testosterone reaches its peak, levels can be as high as 1,200 ng/dL.

What are the symptoms of low testosterone?

The following symptoms serve as red flags that your testosterone levels have tanked:

Why do average testosterone levels fall during aging?

During aging, men undergo what’s known as andropause, which refers to the symptoms they experience as testosterone levels fall. This is also known as male menopause, although it’s different than female menopause in that men are still able to reproduce in their older years and not all men experience andropause.

There are a number of reasons for the decline in testosterone during aging, including the testicles producing less of the hormone. Developing medical conditions that are more common during aging like type 2 diabetes and heart disease can also lead to below normal T as you get older.

What are the symptoms of high testosterone?

Although high testosterone isn’t common, some men do have excess levels of this hormone and need to produce less testosterone. Typical causes include using too much testosterone replacement, testicular or adrenal tumors, or a genetic tendency.

Symptoms of high testosterone include:

If you suspect you have high or low testosterone, seek professional medical advice from your healthcare provider, who can order a blood test to confirm your levels.