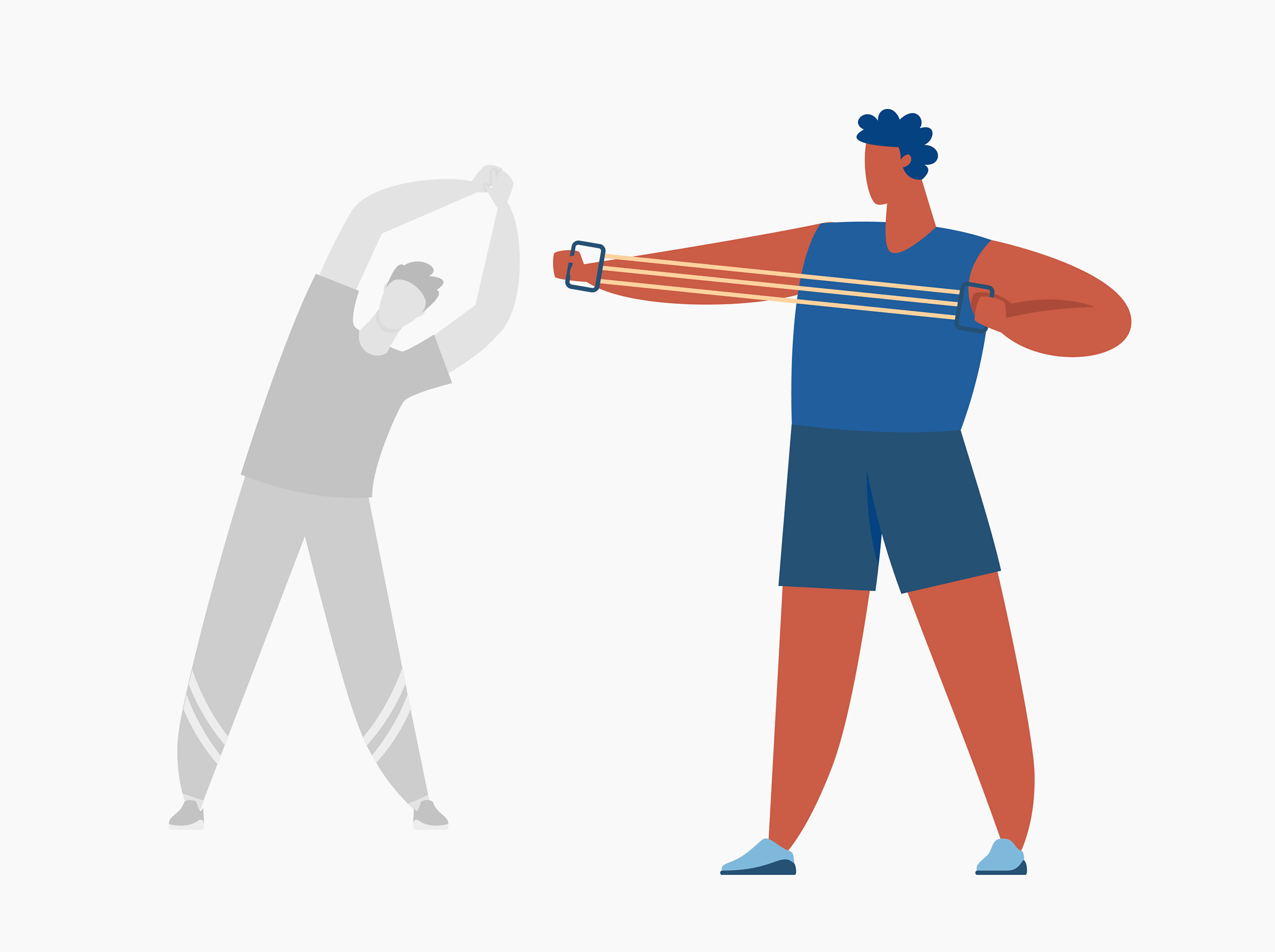 Peyronie's disease is a disorder that causes the penis to curve abnormally. Penis discomfort and pain may be connected with the curvature. It is also a possible cause of erectile dysfunction.

Research shows Peyronie's disease generally occurs in 6%-10% of males between 40 and 70.

PD may correct by itself or be treated with injections to dissolve penile scar tissue. Scar tissue removal surgery near the corpora cavernosa or penile implant correction surgery may also be used. Peyronie's disease can often lead to abnormal curvature in the penile shaft that can affect penis length.

Some exercises are reported to be beneficial in treating Peyronie's disease. According to peer-reviewed studies, penile stretching in the form of penile traction treatment (PTT) aids in penile lengthening and corrects curvature in the acute phase of Parkinson's disease. A simple penis stretching exercise of the shaft may aid in the breakdown of scar tissue and alleviate curvature difficulties.

Peyronie's disease has two stages: acute and chronic. During the acute phase, plaque develops, and curvature begins. This typically lasts five to seven months, but it can last up to 18 months in exceptional situations. The chronic phase frequently follows, and it is distinguished by the stability of plaque formation and curvature. Your therapy will be determined by the stage of Peyronie's disease you are in.

You must perform the exercises correctly to avoid further harm to the penis. Consult your doctor or urologist to confirm that you utilize the proper equipment and complete workouts at home.

Modeling of the Penis

Penile modeling may be used to treat a severe instance of Peyronie's disease. It is possible when combined with collagenase injections. After a surgically implanted inflated penile prosthesis (IPP), it can also happen.

IPP implantation is a surgical treatment that includes inserting a prosthetic device within the penis. This line of therapy is indicated for persons in the chronic phases of Peyronie's disease who also have ED.

This surgical procedure can treat penile residual curvature as well as sexual dysfunction.

While prosthesis implantation can fix curvature concerns on its own, most patients will require additional straightening techniques during the operation, such as penile modeling to mechanically straighten to reduce curvature.

After inserting the inflatable penile prosthesis, the doctor will bend the penis in the opposite direction of the curvature. You can repeat this exercise until the curvature is corrected.

Injections of collagenase and penile modeling

Collagenase injection is one office-based method for penile sculpting. If the plaque is perceptible on examination, urologists will inject it straight in. Studies have indicated that when combined with penile modeling in a doctor's office and at home, this can help lessen Peyronie's disease.

There is, nevertheless, potential that difficulties will arise. During penile modeling, further damage to the urethra is possible. There are techniques to avoid this consequence. Thus, penile modeling is a safe and effective way to treat Peyronie's disease.

Milking, also known as jelqing, is a penile stretching practice that involves massaging the penis to induce micro-tears. When these micro-tears begin to mend, the penis is supposed to seem longer and thicker.

There hasn't been enough research to determine if it's safe or effective. It is generally advised to err on the side of caution and avoid using this procedure until more definitive data is available.

Massage might be used to treat Peyronie's illness. However, data supporting this as an effective technique of treating Peyronie's disease is equivocal.

Penile traction treatment (PTT) is an exercise in which a plastic support ring is worn on the penis by applying pressure to treat Peyronie's disease. It is designed to be used daily for a set amount of time. Penile traction therapy is intended to help straighten the penis or minimize curvature.

We should emphasize that evidence is scarce on the efficacy of penile traction therapy in treating Peyronie's disease. It is unknown whether it aids in straightening the penis and reversing curvature. However, a growing body of evidence suggests it as a potential treatment for reaching these objectives.

According to one study, penile traction therapy may be beneficial in extending the penis.

This, however, only pertains to the acute phase. The role of penile traction therapy in the chronic phase and severe cases of Peyronie's disease is unknown. Treatments in the chronic stage make early diagnosis critical. It should also be mentioned that this study looked at penile traction therapy before and after the placement of a penile prosthesis and surgical correction of PD.

Another potential therapy option for Peyronie's disease is vacuum erection med-devices (VED). Also known as a 'penis pump', it, like PTT, has little data on its efficacy, although there is emerging evidence that it is a feasible choice.

A VED, sometimes known as a penile pump, is a device that places the penis in a vacuum tube. The VED will next use suction to stretch and tug the penis. The gadget is used to treat erectile dysfunction in males and can also treat Peyronie's disease.

In terms of research, a 2020 study found that using a vacuum pump therapy can assist minimize penile curvature and improve blood flow caused by Peyronie's disease.

The research included 53 males, 23 of whom did not use a VED.

The curvature of all 20 patients who had VED traction treatment improved significantly. While the trial was limited, the data suggest that VEDs might be a feasible therapy option.

Engaging in a continuous workout plan is one of the most straightforward strategies to reduce bending due to plaque buildup. Exercise helps maintain your heart health and flexible blood vessels and plaque-free, reducing blockages and lowering the amount of poor cholesterol that contributes to plaque development. Following exercise, the increased blood flow demands aid in filtering harmful particles that might block arteries. Exercise has also been demonstrated to reduce the incidence of erectile dysfunction in males for the same reasons.

The healthy arteries and tissues in the area are enhanced when these muscles are strengthened. Furthermore, when performed consistently, Kegels might also boost stamina and sexual satisfaction.

Therapeutic advances have led to newer treatments such as pulsed acoustic wave therapy as a PD treatment. AWT employs concentrated energy of sound waves that have been found to break up plaque and blockage inside arteries and increase blood flow in and around the region treated.

Sound wave treatment can be used to eliminate plaque from the penis, helping return the penis to a more normal shape.

Initially, this sort of therapy was utilized to treat patients with heart disease to enhance the heart's circulatory system via the main arteries and veins.

This treatment has been demonstrated to be particularly helpful in breaking up the plaque that causes Peyronie's disease and minimizing the overall curvature it creates.

Patients with Peyronie's disease have reported that low-intensity extracorporeal shockwave therapy has improved their quality of life by decreasing plague-induced pain and boosting their penile erection, as well as their general quality of life. Thanks to current medical developments, at-home therapy alternatives are now accessible at a far lesser cost than in the past.

Are there other treatment options that can help with Peyronie's disease?

Vacuum erection devices such as a penis pump can improve penis curvature. An older study showed that after 12 weeks of utilizing the vacuum pump, there was a clinically and statistically significant improvement in penile length and pain reduction curved penis. Of the 31 patients, 21 had a 5–25° decrease in curvature, three had a worsening of the curvature, and the other seven had no change.

Peyronie's disease can lead to significant pain during sexual intercourse. If you experience persistent symptoms such as pain, be sure to consult a medical professional to assess surgical removal of plaque buildup.

There is no current data to support the concept that lifestyle modifications such as food and nutrition help prevent Peyronie's disease, according to the National Institute of Diabetes and Digestive and Kidney Diseases (NIDDK). However, the illness may resolve on its own or with the help of numerous treatment options. In addition, improving diet can help alleviate overall pain and other symptoms related to Peyronie's disease.

Peyronie's disease is often caused by a repeated urethral injury or penile fracture to an erect penis while having sex. However, it is also a common hereditary issue regardless of sexual practices.

What are collagenase injections?

Collagenase Clostridium histolyticum injection (Xiaflex) is used to treat Dupuytren's contracture (a painless thickening and tightness of tissue [cord] beneath the skin in the palm, which may make straightening one or more fingers difficult) when a cord of tissue can be felt on examination.

However, there is some effectiveness with use to improve Peyronie's disease, but it can seriously harm the structure of the penis. Following treatment, one of the tubes inside the penis may break during an erection, a condition known as a penile fracture. Typically, surgery is required.

Hopefully, you catch Peyronie's disease early enough to manage and correct some of the damage early. However, regardless of how severe, it is best to consult a doctor or other health professional to best move forward.